The Wechsler Adult Intelligence Scale (WAIS) is an IQ test designed to measure intelligence and cognitive ability in adults and older adolescents.[1] The original WAIS (Form I) was published in February 1955 by David Wechsler, as a revision of the Wechsler–Bellevue Intelligence Scale, released in 1939.[2] It is currently in its fourth edition (WAIS-IV) released in 2008 by Pearson, and is the most widely used IQ test, for both adults and older adolescents, in the world.

The WAIS is founded on Wechsler’s definition of intelligence, which he defined as “… the global capacity of a person to act purposefully, to think rationally, and to deal effectively with his environment.”[3] He believed that intelligence was made up of specific elements that could be isolated, defined, and subsequently measured. However, these individual elements were not entirely independent, but were all interrelated. His argument, in other words, is that general intelligence is composed of various specific and interrelated functions or elements that can be individually measured.[4]

This theory differed greatly from the Binet scale which, in Wechsler’s day, was generally considered the supreme authority with regard to intelligence testing. A drastically revised new version of the Binet scale, released in 1937, received a great deal of criticism from David Wechsler (after whom the original Wechsler–Bellevue Intelligence scale and the modern Wechsler Adult Intelligence Scale IV are named).[4]

These criticisms of the 1937 Binet test helped produce the Wechsler–Bellevue scale, released in 1939. However, the present-day WAIS-IV has contradicted many of these criticisms, by incorporating a single overall score, using multiple timed tasks, focusing on intellective items and other ways. While this scale has been revised (resulting in the present day WAIS-IV), many of the original concepts Wechsler argued for, have become standards in psychological testing, including the point-scale concept and the performance-scale concept.[4]

The Wechsler–Bellevue tests were innovative in the 1930s because they:

In the Binet scales (prior to the 1986 version) items were grouped according to age level. Each of these age levels was composed of a group of tasks that could be passed by two-thirds to three-quarters of the individuals in that level. This meant that items were not arranged according to content. Additionally, an individual taking a Binet test would only receive credit if a certain number of the tasks were completed. This meant that falling short just one task required for the credit, resulted in no credit at all (for example, if passing three out of four tasks was required to receive credit, then passing two yielded no credit).[4]

The point scale concept significantly changed the way testing was done by assigning credits or points to each item. This had two large effects. First, this allowed items to be grouped according to content. Second, participants were able to receive a set number of points or credits for each item passed.[8] The result was a test that could be made up of different content areas (or subtests) with both an overall score and a score for each content area. In turn, this allowed for an analysis to be made of an individual’s ability in a variety of content areas (as opposed to one general score).[4]

The non-verbal performance scale was also a critical difference from the Binet scale. The earlier Binet scale had been persistently and consistently criticized for its emphasis on language and verbal skills.[4] Wechsler designed an entire scale that allowed the measurement of non-verbal intelligence. This became known as a performance scale. This scale required a subject to actively do something, such as copying symbols or pointing to a missing detail in a picture, rather than just answering questions. This was an important development, as it attempted to overcome biases that were caused by “language, culture, and education.”[4] Further, this scale also provided an opportunity to observe a different type of behavior, because something physical was required. Clinicians were able to observe how a participant reacted to the “longer interval of sustained effort, concentration, and attention” that the performance tasks required.[4]

As the Wechsler–Bellevue scale was the first to effectively use the performance scale, it also introduced the “possibility of directly comparing an individual’s verbal and nonverbal intelligence”.[4] This was possible as “the results of both scales were expressed in comparable units”.[4] The Binet scale did have performance tasks, but they were geared toward younger children. The Wechsler-Bellevue was also unique in that there were entire tests that were considered supplements or alternatives, including “performance” measures such as the Leiter International Performance Scale.[4]

The WAIS was initially created as a revision of the Wechsler–Bellevue Intelligence Scale (WBIS), which was a battery of tests published by Wechsler in 1939. The WBIS was composed of subtests that could be found in various other intelligence tests of the time, such as Robert Yerkes‘ army testing program and the Binet–Simon scale. The WAIS was first released in February 1955 by David Wechsler. Because the Wechsler tests included non-verbal items (known as performance scales) as well as verbal items for all test-takers, and because the 1960 form of Lewis Terman‘s Stanford–Binet Intelligence Scales was less carefully developed than previous versions, Form I of the WAIS surpassed the Stanford–Binet tests in popularity by the 1960s.[2]

The WAIS-R, a revised form of the WAIS, was released in 1981 and consisted of six verbal and five performance subtests. The verbal tests were: Information, Comprehension, Arithmetic, Digit Span, Similarities, and Vocabulary. The Performance subtests were: Picture Arrangement, Picture Completion, Block Design, Object Assembly, and Digit Symbol. A verbal IQ, performance IQ and full scale IQ were obtained.[9]

This revised edition did not provide new validity data, but used the data from the original WAIS; however new norms were provided, carefully stratified.[9] 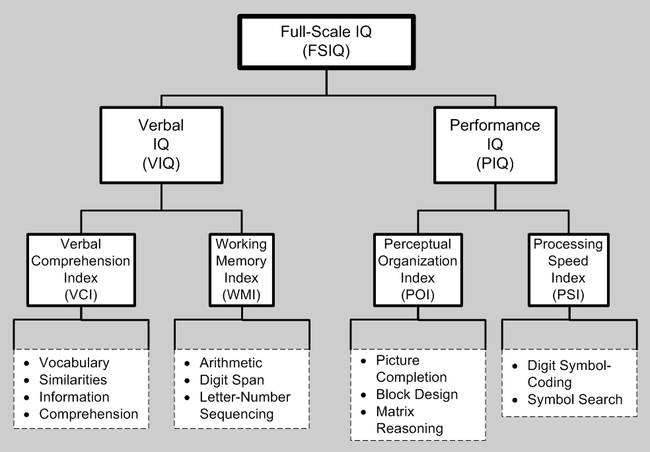 The WAIS-III, a subsequent revision of the WAIS and the WAIS-R, was released in 1997. It provided scores for Verbal IQ, Performance IQ, and Full Scale IQ, along with four secondary indices (Verbal Comprehension, Working Memory, Perceptual Organization, and Processing Speed).

Subtest(s) not included in the sub-indices:

Supplementary subtest(s) (Only to be used for total VIQ index scoring and specified sub-index):

Subtest(s) not included in the sub-indices:

Supplementary subtests (Only to be used for total PIQ index scoring and specified sub-index): 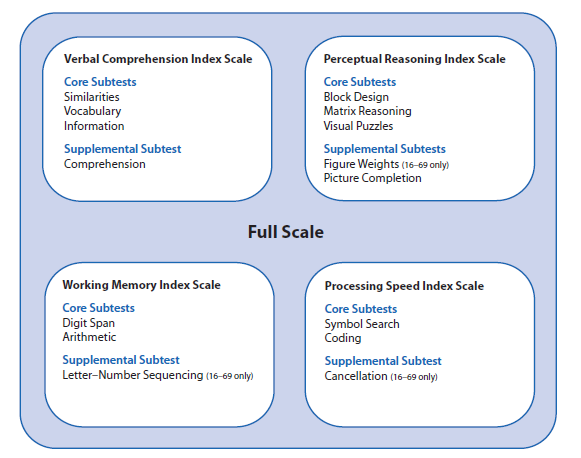 The current version of the test, the WAIS-IV, which was released in 2008, is composed of 10 core subtests and five supplemental subtests, with the 10 core subtests yielding scaled scores that sum to derive the Full Scale IQ. With the WAIS-IV, the verbal/performance IQ scores from previous versions were removed and replaced by the index scores. The General Ability Index (GAI) was included, which consists of the Similarities, Vocabulary and Information subtests from the Verbal Comprehension Index and the Block Design, Matrix Reasoning and Visual Puzzles subtests from the Perceptual Reasoning Index. The GAI is clinically useful because it can be used as a measure of cognitive abilities that are less vulnerable to impairments of processing speed and working memory.

There are four index scores representing major components of intelligence:

Two broad scores, which can be used to summarize general intellectual ability, can also be derived:

The WAIS-IV was standardized on a sample of 2,200 people in the United States, ranging in age from 16 to 90.[10] The demographic characteristics of the sample were modeled after the proportions of different groups in an analysis of data from the U.S. Census Bureau. An extension of the standardization has been conducted with 688 Canadians in the same age range.

The WAIS-IV measure is acceptable for use with people who are 16–90 years of age. For people younger than 16, the Wechsler Preschool and Primary Scale of Intelligence (WPPSI, 2½–7 years, 7 months) and the Wechsler Intelligence Scale for Children (WISC, 6–16 years) are used.[11]

Intelligence tests may be used to assess the level of cognitive functioning in individuals with psychiatric illness or brain injury. Rehabilitation psychologists and neuropsychologists use neuropsychological tests (including the WAIS-IV) to assess how the individual’s brain is functioning after it has been injured. Specific subtests can provide insight into specific cognitive functions; for example, the digit span subtest could be used to look for attentional difficulties.[11]

The Wechsler tests can also be used to identify intellectual giftedness, and are commonly accepted as qualifying evidence for high-IQ societies, such as Mensa, Intertel and the Triple Nine Society.[12][13][14]